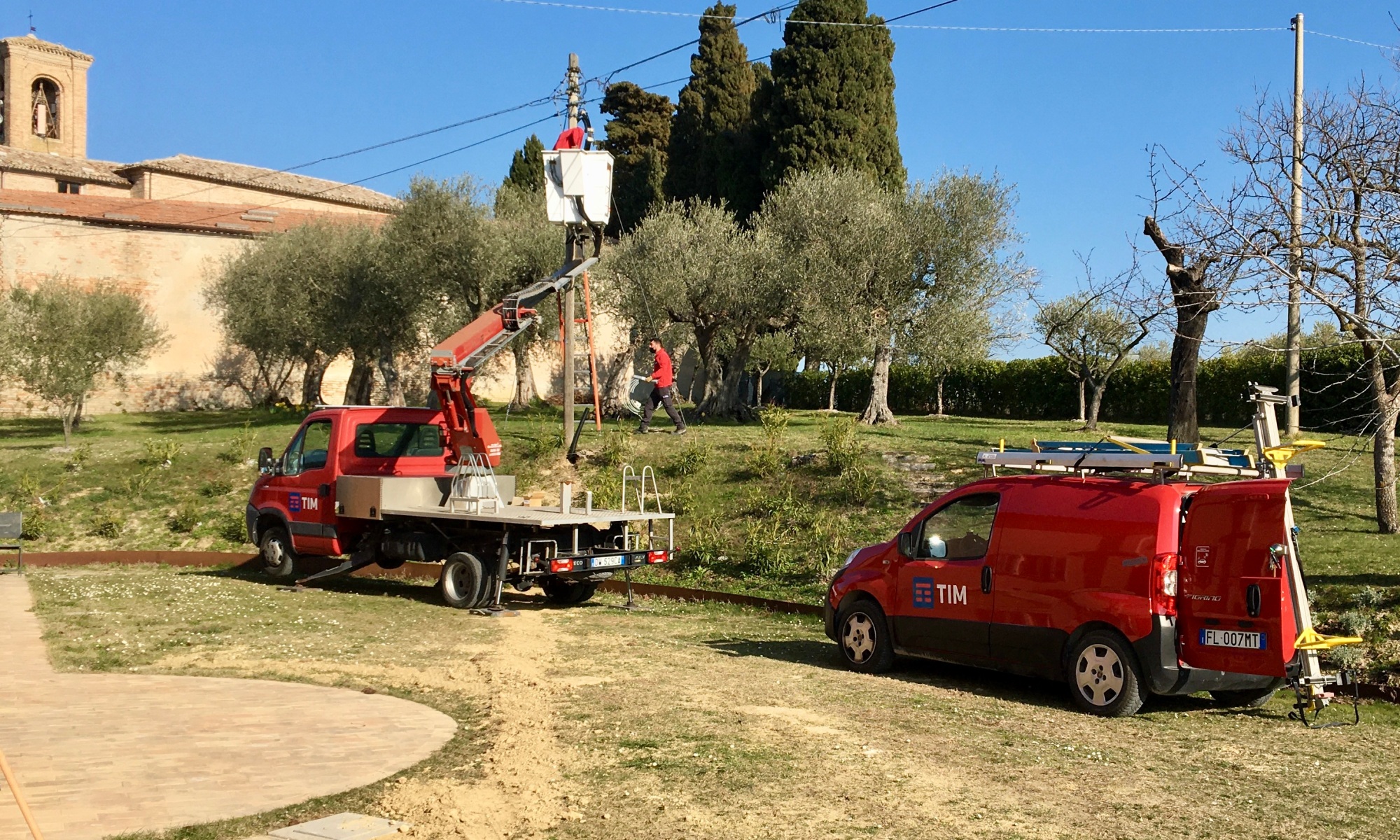 Photo: Connected – or so we thought (3rd March)

Italy continues to delight and frustrate in equal measure.

Here’s a story of frustration. We haven’t made this up. It happened.

In the Telecom Italia (TIM) shop in Fano they said that ordering a new fixed line for TIM Super Fibra was quicker than ordering online. We signed. The fib began.

Colin receives a cal to say they can’t process our order. There is a problem with my Codice Fiscale (a financial code that everyone has in Italy to record financial transactions). How could there be, I’ve been using it for 18 years. When we bought our first Italian mobile TIM entered my Codice Fiscale incorrectly and their system won’t allow them to correct it!

“Can we use your wife’s Codice Fiscale?” they asked. Not having much of a choice I agreed. “Then we’ll need her identity documents”. 10 days in and we’d made no progress.

No response so request an update

We’re told we can expect a visit from a technician within the next 10 days.

The TIM technician turns up. He’s here for 15 minutes and says we have to make an appointment for the installation crew. They will decide to take the wire from the telegraph pole in our garden direct to our first floor or put it underground and into the house. Later that day an SMS arrives with a link to make an appointment. The link doesn’t work. We try several times on the Friday and over the weekend.

We call the 187 helpline. He says the link doesn’t work because it expires after three days and we’ve left it too late. We repeatedly tell him that we’ve been trying for three days and all he keeps saying is that the link has expired. He can’t make another appointment. We will get a call within another 3 days to make an appointment. Welcome to the 21st Century.

We get a call to make another appointment.

A crew from ITEM arrive as arranged. They are a private company subcontracted to deliver the connection. They criticise TIM as being useless. They spend 20 minutes looking at the telegraph pole, the cables and inside the house. They then announce that we need to dig a trench from the telegraph pole to the house for the cable. Once we’ve done that we need to make another appointment.

TIM call. The next available appointment is Friday 26th February. At least that gives us a week to dig the trench and put in the tube for the connection.

Colin digs a channel from the pole to the level part of the garden.

By chance the Scavatorre (bloke with a digger) was here for the building works. He digs the channel to the house saving us a huge job.

A second ITEM crew arrive. I should have been suspicious when I asked them to park their vans off the road so that vans/lorries for the building site could get access. They said they would after they’ve had a look. Yet another survey. They were here for 10 minutes. They said there wasn’t a box on the telegraph pole for them so they just left. After complaining that this was the third visit they just shrugged their shoulders and said, in English, “Italy, Italy”.

We called the TIM Fibra helpline, 187, to book yet another appointment. “We don’t book appointments, you need to phone this number…….”. We did and the recorded message said they weren’t taking any calls, just text messages. We texted them, but it reported as undelivered.

A young man from 187 called. We explained that all we wanted to do was book another appointment. He couldn’t make an appointment but Gerardo promised to call us back. He didn’t.

Whilst working in the garden two TIM vans turned up unannounced. They were here to survey what needed doing. Let’s just say we were very restrained explaining that they were the fourth crew. We didn’t need another survey, we needed the connection. Having completed their survey they advised they couldn’t do it now. We were just about to close the gates and hold them as hostages when they said they’d go for lunch and come back this afternoon.

True to their word they did. Up in the cherry picker they tidied up all the cables on the pole and dropped a cable and fitted the box that the last crew told us was missing.

Chatting to them I asked what the coil of cable was at the top of the pole. It was fibre optic cable. I asked why we couldn’t be connected directly to the fibre optic cable that passes 20m from the house. “We can’t do that. This is for the core infrastructure”. So our internet signal will pass through our garden via fibre optic on it’s way to the cabinet in the village. It will then return to the house via copper wire. Frustrating.

After fitting the box they started to pack up. It turns out they are the ‘putting a box on the pole crew’. They don’t connect the box to the house, another crew had to do that! They assured us we’d be contacted by the connection crew.

Ping. A text arrives. “Don’t forget that you have an appointment with the technician tomorrow morning at 08:30”. News to us. Between the previous Wednesday and Friday an appointment for us had been made but no one thought to tell us.

Gabriele the builder knocks on the window. “Colin, TIM are here”. By the time I get out to the garden they were already putting the cable through the tube in the garden and connecting the house.

There were two guys pulling cables. One was Mr. Grumpy, constantly using the imperative form to order his oppo. “Give me the scissors. Give me the hammer. Give me the cable”.

Connecting the wire from the telegraph pole into the house took no time at all. Running a cable from where it entered the house to where we wanted the router (6m away) was a real trauma for Mr. Grumpy. He searched the house for telephone points. “It’s impossible. There are no telephone points” he grumbled. I pointed out the two that the had missed. I also told him that the second crew to visit had told us they were no use as they were so old (installed in 2003).

“We want the router here. The same place that we told crew number two” we told him. “It’s impossible” he said. “There isn’t a telephone point”. After lots of harrumphing he conceded that he could fit one where we wanted it. “Perfect” we replied.

Somewhat reluctantly he fitted a socket. Then the big moment. Connecting the router and testing the connection. He connected it. No signal. He then complains to us that it doesn’t work. He tested it with his meter and got a signal, so it must be the box. He then connects another router whilst telling us that it’s his test box. If it works, he can’t swap it for ours. It doesn’t work. He sighs again and again.

Then he spots that the colour of the cable is wrong. “It’s black, not grey”. We have no idea, we just gave him what we were given in the shop. He changed it for a grey one and it worked. “It’s the router” he declares, “and it’s not a new box, it’s second hand with the wrong cable”. In a strop he cuts the black cable in two to make sure no one else can use it!

We call the shop on speaker phone so he can explain that the box is second hand and it doesn’t work. They say they have a new one we can swap it for. That’s enough for Mr. Grumpy, he packs up and leaves.

We head for the shop in Fano. They say it’s impossible that it’s a second hand box but agree to swap it anyway. Then follows half an hour of problems as they spot that the router is in Colin’s name but the contract is in Jan’s. We explain that TIM cocked up Colin’s Codice Fiscale (see Wednesday 27th January). “We can change it into Mr. Fisher’s name but that will cost you €10”. Jan’s reaction caused the shop manager to intervene and waive the charge.

Back home we connected the new router to the line. Nothing at first, then it sprung into life. All it’s lights lit up and we were in business. We logged on and tested the speed.

52 days after buying the router we had 52Mbps, more than expected. We wonder if it had taken 100 days would we have got 100Mbs!

We were happy about the result, just not how we got there. Why does it have to be this way?